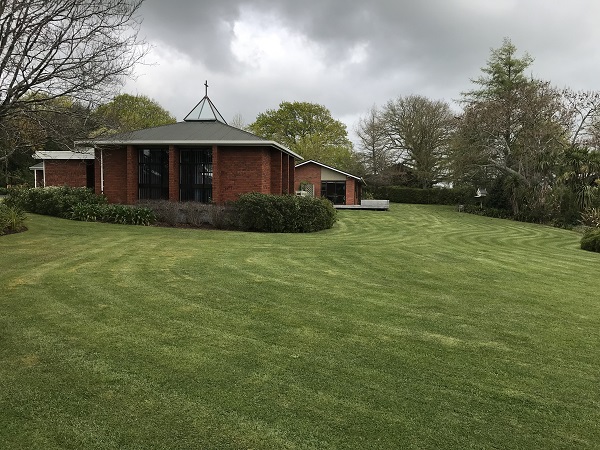 The story of the Houchen Retreat over the last year-or-so is a prime example of Momentum Waikato both ‘taking the baton’ for a charitable trust’s mission and stepping up to a community leadership role, all while also being a key chapter in our Covid response.

Situated on a 1.7ha site on the south-west edge of Hamilton in the suburb of Glenview, the Houchen’s Retreat was originally established by the Houchen family in the 1980s to provide a place of rest, study and reflection for visiting Anglican priests and the wider church and local communities. As the years have passed its use by the church has dropped away and in recent times it has mainly been used as spaces-for-hire.

The current generation of family trustees had meanwhile not been getting any younger, so faced with mounting responsibilities and with a desire to see it continue and further develop as a community asset, they decided to transfer the Houchen Trust and its land and assets into the care of Momentum Waikato.

The sign-over took place in October 2019, with Stuart and Peggy Houchen present and secure in the knowledge their family’s intent for the place would continue in perpetuity, with no chance of it being on-sold for redevelopment.

Momentum was clear in this move that we would realise this goal as ‘the landlord’ and asset manager, rather than by directly delivering services ourselves. Almost immediately the ideal partner appeared, with the Wise Group identifying the Houchen campus as the site for their first ‘wellness village’.

Their intent is to provide a centre for wrap-around mental health support services in a non-clinical setting, which will be a model for a network of such facilities around the country. The advantages of doing this at a site managed by Momentum are the surety of a like-minded landowner that is equally committed to the local community and sufficiently resourced to progress needed development, while avoiding the demands of asset management themselves.

Work in re-purposing the facility started last summer, and then Covid came over the horizon.

The Wise Group foresaw the looming challenge, so weeks before the lockdown they switched from preparing Houchen’s to provide a mental-health service to instead setting up a relief centre there for producing food and providing immediate support to the vulnerable. We assisted them by buying and installing two chest freezers in early March and continued to kit them up with what they needed through the crisis. 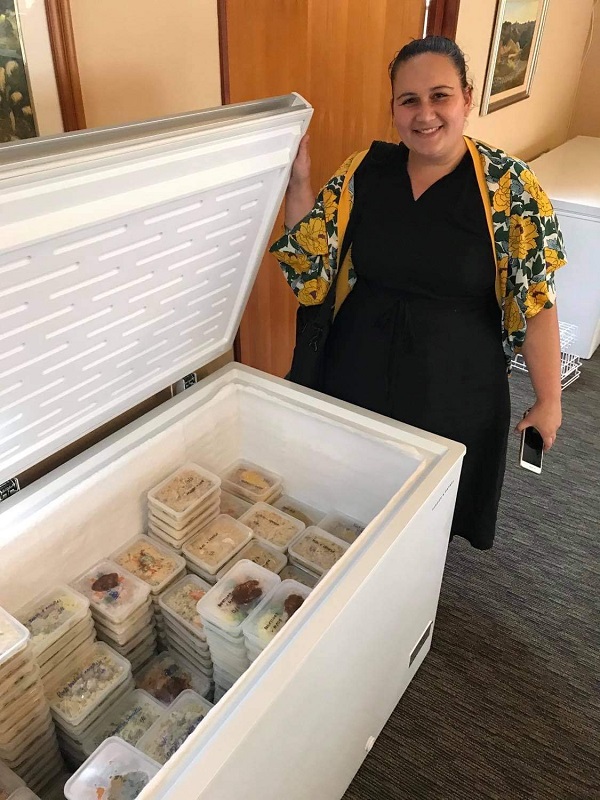 Erana Severne from the Wise Group with frozen meals prepared for the Covid relief effort.

This was just one example of how the arrival of Covid saw us switch from long-term strategic projects in mid-March to a rapid emergency response by the start of April.

We were fully engaged with the Waikato Community Funders Group’s daily Covid-relief-co-ordination effort, which supported core social agencies and frontline services by identifying gaps in provision, providing a single application gateway and aligning our respective responses to meet the needs across the region.

The Wise Group’s ‘Houchen’s Hub’ was effective and ready-to-go, but it soon became clear it could not meet the demand for food and supplies by itself. So Momentum connected the community funders’ response to the Hamilton City Council’s offer to mobilise the Claudelands event centre’s kitchens and funded the release of food stored there. From April to June, these and other smaller operations collectively distributed nearly half-a-million meals and food parcels to tens of thousands of people across the Waikato.

As ever, Momentum Waikato’s role in the regional funding eco-system was to be the flexible component, connecting and convening as we went. As the community funder best configured to receive donations, we launched The Greatest Needs Appeal, so donors could be sure their support was going to where it was needed, as identified by the entire Funders Group.

Then with the Appeal’s systems underway, we linked with the Waikato Regional Civil Defence and Waikato Regional Council by providing the payment gateway for their Mighty Waikato Cookbook fundraiser. This initiative added to the Greatest Needs pool and subsequently won an international cookbook award!

The ‘Here to help u’ service led by Community Waikato and the Wise Group was also a key element of the Funders Group response in Hamilton, particularly as there were a lot of people seeking support for the first time. Our staffer Janice Lapwood was involved in it’s initial food-supply mapping and then we promoted and funded its web-based ‘front counter’, which enabled people to anonymously seek assistance and then connected them quickly with what they needed.

These immediate Covid relief operations wound up in June, the end of the 2019-2020 year covered by this report. The Wise Group switched back to establishing their wellness village at Houchen’s, while we got on with everything else reported in this volume.

The Greatest Needs Appeal has nevertheless continued, though on a smaller scale than during the lockdown and covering all basic needs rather than just food, as the economic hardship has of course not gone away for many affected by the economic impact of the pandemic.

If you would like your support to reach the most vulnerable in the Waikato, you can still donate to The Greatest Needs Appeal at momentumwaikato.nz/donate.