Children with disabilities will be the ultimate benefactors of a new philanthropic investment fund recently established with the Waikato’s community foundation.

McKenzie Centre in Hamilton supports children who have disabilities and their families to have full and fulfilling lives in communities that value them. Established in 1982 with donations from the McKenzie Education Foundation and the Telethon Trust, it has now secured a resilient ongoing income stream by putting capital into the new McKenzie Centre Fund in the care of Momentum Waikato.

Stephanie Wacker, an early intervention teacher at McKenzie Centre, works with a child.

Centre director Trisha Benge said Momentum Waikato will be a prudent guardian of the Fund.

“This is a forward-thinking initiative with Momentum that we feel privileged to initiate as a future investment for the children and their whaanau that we support,” says Trisha.

“Experiences of early childhood have a later impact on wellbeing. Child development is influenced by individual, family and community factors, and early childhood intervention helps to improve the lives of the children and their families and achieves better long-term outcomes.”

Momentum Waikato Chief Executive Kelvyn Eglinton welcomes McKenzie Centre to the growing number of local trusts working with the community foundation to realise the best outcomes from their financial resources.

“Many small to medium for-purpose organisations and institutions have their ‘rainy day fund’ capital sitting in the bank providing minimal interest,” says Kelvyn.

“It makes sense for such entities to put that money into Momentum’s regional endowment fund, as its scale and the expertise of our investment partners Craigs and Forsyth Barr ensure much greater returns, providing a meaningful and sustainable income stream and/or capital growth.

“We’re proud to be partnering with the McKenzie Centre, who have helped thousands of children and their families over the last 40 years, the work they do is simply awesome.”

McKenzie Centre will use the investment income from the Fund to achieve its long-term strategy and growth. The certainty of this funding will allow it to prioritise expenditure and identify interventions that improve outcomes and enhance wellbeing for the children and their whaanau that they support.

McKenzie Centre is part of Enrich Group, which is headquartered in Te Awamutu and is also the kaitiaki of Enrich+, Enrich+Property Trust, Active+ Waikato and Enrich Group Management Services. It helps each organisation grow their capacity to meet the increasing demand for disability services in the community. 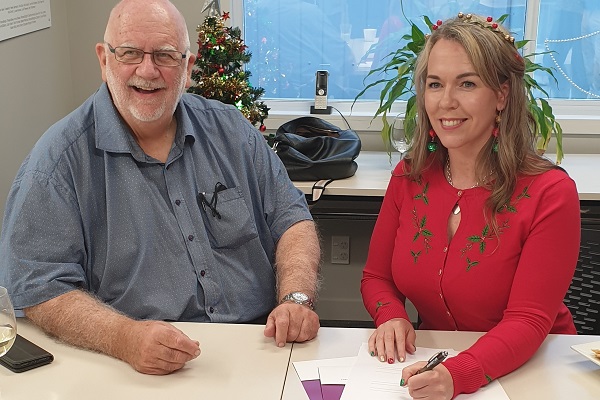 Ken Williamson and Maree Haddon at the signing of the Deed of Gift establishing the McKenzie Centre Fund.