Champions of the Waikato join forces

Two young organisations focused on ensuring a proud and prosperous Waikato forever have come together in a new investment partnership.

The Community and Enterprise Leadership Foundation – CELF – was established in 2014 to ‘grow future leaders from all walks of life to build a stronger Waikato’.

The Momentum Waikato Community Foundation was established in 2013 to build a regional endowment fund and drive transformational projects, with the aim of creating ‘a better Waikato for everyone, forever’.

As with all monies in its care, the Fund is being added to Momentum’s investment portfolio, from where the resulting income, which will be consistently higher than a bank account return, will be paid out or re-invested annually according to the donor’s wishes in its Deed of Gift.

Executive Director Tania Witheford says CELF decided to set up a named fund with Momentum specifically to manifest the two organisations' shared belief in the Waikato.

“Being able to re-imagine the place you’re in is central to effective leadership,” says Tania.

“How does this place make us better people, why and how do we ensure it is still thriving for future generations?”

Tania says it is your networks here, where you stand, that enable and drive the ‘four capitals’ – human, social, natural and financial/physical – that are acknowledged in Treasury’s ‘Living Standards Framework’ as generating wellbeing. 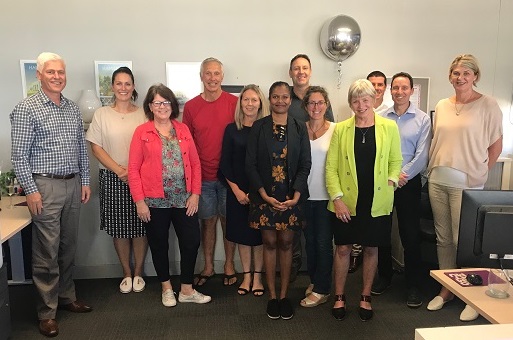 MILESTONE: CELF and Momentum folks at the deed signing for the CELF Fund.

“The CELF Fund is a particularly pleasing initiative,” says Kelvyn, “as it forges a key alliance that will go way beyond the usual service we provide.”

“CELF is building the personal leadership capacity that creates and drives the transformational projects we are here to enable and power. Momentum exists to ‘connect and convene’, so there are obviously going to be great synergies as we tap into each other’s networks.”

Tania says CELF’s founders – Bernie Crosby, David Irving and Peter Sun – asked themselves what would take the Waikato to the next level, from good to great, and then identified greater leadership capacity at all levels, across all sectors and in all forms, as the key need.

“Leaders are the catalyst. Great leaders create a ripple effect that empowers everyone and everything around them,” says Tania.

“The unique aspect of CELF’s Elevate program is the bringing together of business and community. The fees from the for-profit sector students subsidise those from the for-purpose sector, and they then participate together.

“A highlight of the course is the waka voyage at the end, with the awa as a constant metaphor, one specific to this place called Waikato.

“The students assemble on the banks, they tell each other what it took for them to be there, and then they sort out what they need to do as a group to travel and be safe on the river.

“The double-hulled waka echoes our alliance between business and community, of commerce and cause lashed together, the two parts making it more stable.

“The water is a means of transport, it feeds us, fosters our lives, the students are always aware of that as they journey.

“It is all about engendering the universal leadership traits – self-awareness, empowering others, acknowledging the responsibility to serve a purpose greater than oneself.

“It critical to recognise the difference between managing and leading – how do we challenge the norm, create positive impact that brings everyone along and together,” says Tania.

Peter Sun, a co-founder of CELF and its inaugural Programme Director from 2014, says its vision is based on the premise that responsible leadership goes far beyond the leader’s own organisation, embracing all stakeholders, both within and without, for the common good of all.

“Bringing leaders from all sectors within the community together, to understand each other and see where effective collaborations are possible, raises the capacity of the whole region,” says Peter.

“CELF's strong place-based learning focus has already borne fruit for the Waikato as it tackles the growing array of complex problems faced by the world. The founders are to be commended for their foresight, vision and determination.

“I have been deeply impressed by the calibre and the spirit shown by our recent and past CELF graduates and am honoured, along with my Waikato Management School colleagues, to be working with the incoming 2022 cohort."

Tania says the sustainable income generated by the CELF Fund at Momentum Waikato will go towards resourcing access to the programmes, so that more people and their communities can benefit from this empowering experience.

The CELF Fund welcome donations from anyone keen to build leadership capacity for an even better Waikato – please go to momentumwaikato.nz/donate.