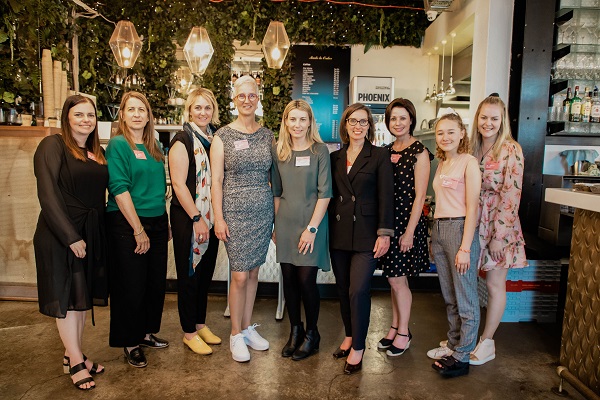 The Waikato Women’s Fund Board elected in May 2020.

This special ‘High Tea’ celebration of women and young girls in the Waikato, held in March 2020, achieved all the goals that lie at the heart of why the Fund exists – to create opportunities, lift each other up, raise expectations, challenge gender roles, lead with purpose, support women-led projects and, most of all, make a real impact!

The inspirational speakers – Angela Swann-Cronin, the first Maaori woman to be a pilot in the Royal New Zealand Air Force; Dr Karlo Mila, an internationally acclaimed NZ Pacific poet and writer; Madiha Changezi, a millennial former refugee from Pakistan and published author; Karen Morrison-Hume, Missioner and CEO at Anglican Action Waikato; and Parekawhia Mclean, Chairperson at Te Whakakitenga o Waikato – all shared how they have led with purpose.

These impressive waahine have each ‘raised the bar’ for the ambitions and expectations of women and young girls in our region, be it on leadership and governance, Maaori and Pacific engagement, the number of women pilots in aviation, or getting authentic voices showcased across the arts and creative industries.

Each of them spoke about the ‘what I wish I had known’ realisation that has prompted them to support women-led projects close to their hearts. They encouraged us all to not just follow in their footsteps, but to go even further than they had achieved.

With more than 230 attendees, including student leaders from local secondary schools, enjoying a beautiful High Tea at the Wintec Atrium, ‘Waahine Toa: Wisdom Shared’ raised $17,177 towards our endowment fund.

Four months earlier, the Waikato Women’s Fund had been the recipient of an incredibly generous donation of $10,000 from the Waikato Diocesan School for Girls. The school has a tradition of donating its students’ annual fundraising effort to a worthy cause and in 2019 Dio’s student leadership team had chosen our Fund, for which we are very humbled and thankful.

Alongside the monetary donation, Dio students at the same time also collected and gifted an impressive number of toiletry items to the Waikato Women’s Refuge-Te Whakaruruhau and Anglican Action.

Another earlier community event enjoyed by the Waikato Women’s Fund’s members was the screening of ‘Alone through Iran’, the story of Swedish runner Kristina Paltén’s 58-day solo run across the Islamic Republic. More than just a fundraiser, this was also an opportunity for the Fund’s members to connect, share stories and extend their networks.

These fundraising events, donations from our growing membership and our endowment investment income made possible our community grant for the 2019-2020 year – $2,000 to the House of Grace Trust in Hamilton, a private retreat for young women aged 12 to 23 years old preparing for childbirth.

In May, in the midst of the Covid Lockdown, the Waikato Women’s Fund’s new committee was sworn in with a (wo)mandate to continue the inaugural committee’s work empowering women and inspiring girls throughout the Waikato.

In June the Fund celebrated achieving its first endowment milestone of $100,000. This giving circle of determined waahine continue to have ambitious plans, with the committee working towards a goal of hitting $1 million in 2024.

To become a member or to find out more about the Waikato Women’s Fund, check out our website: waikatowomensfund.nz.