It is just on a year since I became the Ambassador for Momentum Waikato, a role I particularly enjoy when it comes to introducing our signature ‘transformational project’, the Waikato Regional Theatre.

Good timing really, as 2021 was when the Theatre really stepped off the drawing board. The legal process around the urupaa near the site was slowed by Covid and took up much of 2020.

Last year was therefore all about getting the build underway. The Waikato Regional Property Trust, which has been established to own the Theatre and its operating company, began contract negotiations with Foster Construction just as I was starting here at Momentum in February. 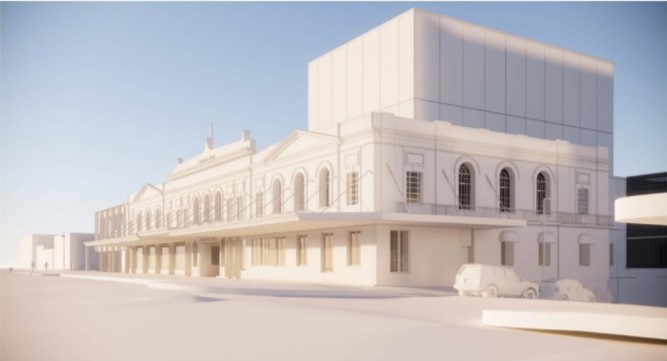 The Waikato Regional Theatre, situated at the South End of Hamilton’s CBD, will be an impressive state-of-the-art, world-class performance venue. Its 1300-seat auditorium will be flexible enough to showcase any and every kind of live performance – from ballet to hip-hop, theatre to kapa haka.

As such, it will be one of the Waikato’s most complex buildings, planned with the constraint of a fixed fundraised budget, so those contract talks took a while, the signatures being inked at the end of July.

Since then things have moved quickly despite the Covid lockdowns. Disassembly and minor demolition works in Embassy Park and around the old Hamilton Hotel got underway in August and accelerated with the fencing of the site in early October.

In November and December the 1990s shops were demolished and heritage elements from the Hamilton Hotel were carefully taken out. The Riff Raff Statue was removed ahead of re-appearing outside the Waikato Museum while the Theatre build is underway.

It was my great pleasure to attend the Sod Turning for the Theatre, held behind the old Hotel on 30 November. The presence of the Prime Minister meant a rowdy group of protesters provided a vexing background track, but neither they nor the heavy rain beforehand derailed proceedings.

By the time you read this the support structure for the Hotel’s façade will be in place and demolition will be more advanced. The Theatre will open in the first half of 2024.

I encourage you to stay up to date and show your support for the Waikato Regional Theatre by visiting sharethestage.co.nz and clicking ‘Join the Audience’ to sign up for email updates.