The Waikato Regional Theatre project has continued to roll during the Covid-19 crisis, although progress has been slowed due to the resulting extra hurdles and other challenges.

The Waikato Regional Property Trust (WRPT), the new entity that will own and oversee the operation of the theatre, was focused for the first three months of the year on revisiting and determining the best procurement process for a construction contract. This culminated with the selection of Foster Construction as the primary contractor at the end of March, just as we entered Level 4.

The next step was the pricing process, wherein Fosters have been engaging with sub-contractors and suppliers to confirm the budget needed to complete the building. This stage was significantly delayed by the lockdown as access to the site was curtailed, such that it is still underway and the numbers are still a few weeks away.

If the lockdown had happened a week or two later than it did, it would have derailed our main community fundraising effort. The ‘Share the Stage’ campaign to ask for donations from the public was due to run during April and early May and would have included a major presence at a couple of big sporting and community events.

Instead the exciting promotion we’ve cooked up has remained under wraps and will now run later in the year, although with more targeting and without the big events.

On other fundraising and sponsorship fronts, the delay in itself and the government and market responses to the crisis have opened the door to more opportunities. The theatre project is still, at the time of writing, in the frame for funding as a ‘shovel ready’ project and we are now pursuing other funding opportunities to cap off the budget.

The issue that has recently moved to the forefront of public discussion has been how the theatre-build factors in the adjacent urupaa identified by mana whenua hapu Ngati Wairere, who have been engaging with us throughout the project via both Nga Mana Toopu o Kirikiriroa and Te Ha o Te Whenua o Kirikiriroa.

The regulatory and planning process required Heritage New Zealand to adjudicate on the status of the Hamilton Hotel building and the riverbank urupaa below the site, which was marked in the District Plan. For the old hotel, approval was given to retain the street frontage while rebuilding everything behind it.

For the urupaa, the ruling was that its north-west corner did overlap with the footprint of the theatre. The obvious remedy was to redesign that corner of the theatre to avoid the urupaa, which was immediately accepted and enacted by the WRPT and Momentum Waikato. Some rooms have been moved so the south-east corner of the complex will now be inset and an outside deck will now be cantilevered off the building - see below. 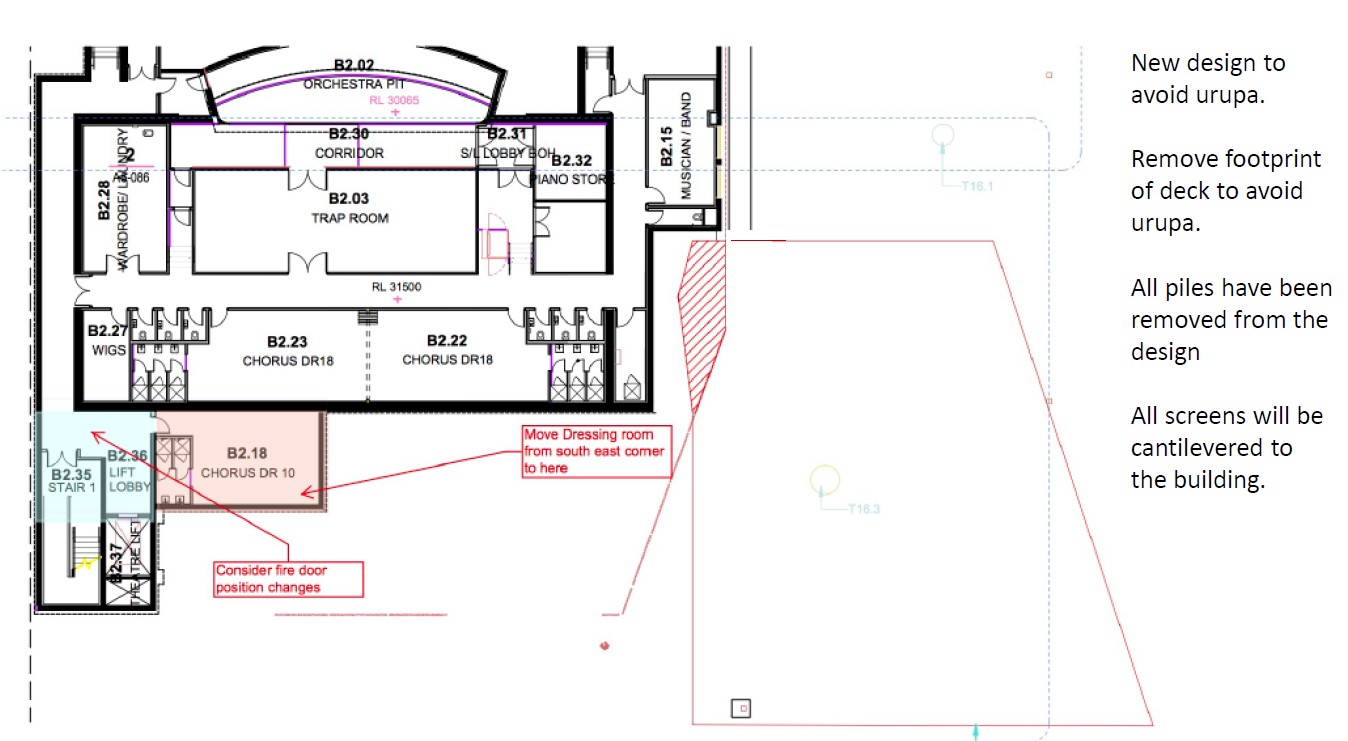 We have since met again with mana whenua representatives Nga Mana Toopu o Kirikiriroa (‘NAMTOK’) and Te Haa o Te Whenua o Kirikiriroa (‘THAWK’) to explain the new lay-out and are meeting with other whanau as they request.

NAMTOK’s Chairperson and Trustees visited the theatre site on 11 June to endorse the redesign, with Kuia and Kaumatua of Ngati Wairere from both Hukanui and Tauhei Marae attending to provide karakia and lift tapu over the urupaa ground - see below.

Talks with Ngati Wairere continue on securing the urupaa area and ensure its history is understood by the whole community.

The procurement, final funding and cultural heritage processes are all now well advanced, and our hope and expectation is that the respective resolutions will converge in a few weeks, allowing a start date for construction to be announced soon after.

STOP PRESS: The urupaa resolution is well covered in a Waikato Times article that’s has just been published.