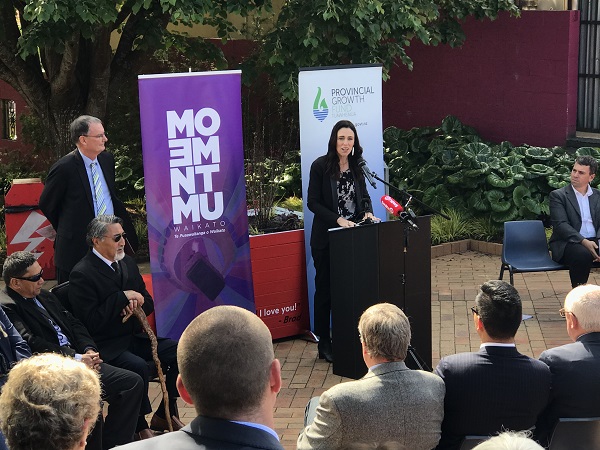 Prime Minister Jacinda Ardern’s announcement today of Government support for the Waikato Regional Theatre is ‘the moment of take-off’ for the transformational project.

The Provincial Growth Fund has granted $12 million towards the $74 million riverside performing arts centre, taking the total raised to date by the Momentum Waikato Community Foundation to $69 million and allowing construction preparations and the final fundraising push to get underway.

“Our vision is for every kid in the Waikato to have the opportunity to ‘Share the Stage’ with the world’s best performers,” says Momentum Waikato Chair Leonard Gardner.

“The Waikato Regional Theatre will be an impressive state-of-the-art, world-class performance venue, the pride of Hamilton and the Waikato.

“The remarkable flexibility of its stage configurations, the crystal-clear acoustics and up-close sightlines of its auditorium will, however, just be the means to an end.

“What matters is the enchanting and enthralling experiences that will happen within and around the theatre.

“We will all be able to see fantastic international entertainment here on our doorstep, and our best performers will have the springboard they need to launch themselves out into the world.

“A big thank you to the Government and its Provincial Growth Fund team. This key contribution is the green light for preparations for the construction of the Waikato Regional Theatre to begin.

“When the resource consent conditions are met and the final costings of construction and materials are sorted, we will be ‘Go’ to start building,” says Mr Gardner.

Work on the site behind the former Hamilton Hotel on Victoria Street is expected to begin in the New Year with a blessing and the ‘turning of the first sod’.

That point will also mark the launch of ‘Share the Stage’, a community fundraising campaign to raise the balance of the project budget, which will give individuals, families and businesses an opportunity to claim their own stakes in this exciting vision.

The Waikato Regional Theatre has already received funding from the Hamilton City Council, Waikato Regional Council, Trust Waikato, Lottery Grants Board and numerous individuals, families, trusts and businesses. It is expected to open in April 2022.

“Thank you to everyone for the support for the theatre project to date, we are humbled and hugely encouraged by the generosity of our community,” says Mr Gardner.

“Together, we are realising Momentum‘s goal of creating ‘A Better Waikato for everyone, forever’.”

“The theatre will catalyse the Waikato as a hotbed of creative activity, providing a venue for top shows and high-quality performance training programs within a couple of hours drive of most of New Zealand’s population.

“The positive economic and social benefits of this transformational project will impact across the Waikato.

“The night-time buzz of the theatre and its built-in hospitality spots will a destination that will neatly complement the region’s day-time tourism attractions such as Hobbiton, Waitomo, Maungatautari and the Hamilton Gardens, giving visitors good reason to linger in the Waikato and triggering the building of new hotels in the city.

“The theatre and its surroundings will celebrate the significance of the river and this place to the mana whenua, through pouwhenua, tukutuku and other cultural decoration and treatments. We thank Waikato Tainui and Te Haa o Te Whenua o Kirikiriroa for their support and look forward to continuing engagement in the spirit of partnership.

“The heritage of the site will also be realised through the retention and enhancement of the Hamilton Hotel frontage, plus of course the Riff Raff Statue will continue to be the centrepiece of the Rocky Horror Show theming of the adjacent Embassy Park.

“Ultimately, the theatre will realise the dream of generations of Hamiltonians by decisively turning the city to the river. The foyer and courtyard event spaces will offer a sophisticated urban setting, looking out at the stunning vista of our Awa,” says Mr Eglinton.

“Our CBD is becoming a groovy, exciting place to live and work, and the Waikato Regional Theatre will take it to the next level, creating a full spectrum cosmopolitan city centre that attracts talent from around the world.”