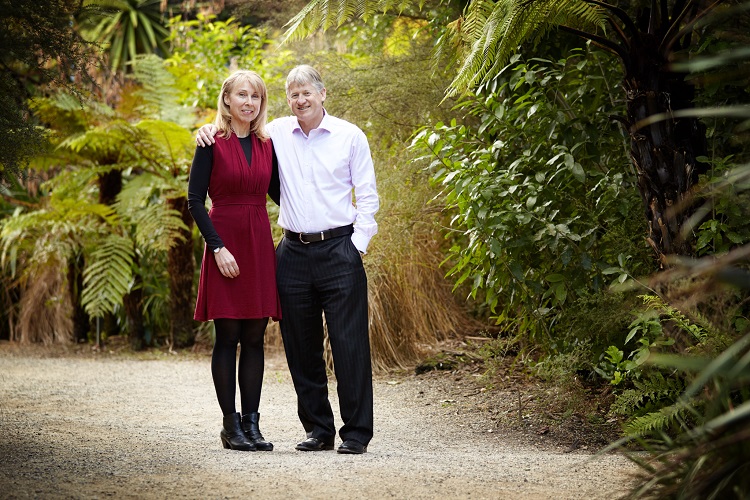 Jon and Sue Tanner lead by example. Growing up in the Waikato they were taught how important it was to be generous with their time, money and energy into things that mattered.

Jon’s youth was dominated by sport, and in particular the game of hockey, which later grew into a passion that drove his early philanthropic interests. He represented New Zealand, began coaching and was the driving force in creating the Midlands regional hockey franchise so players could develop their skills, and reach the highest level, without leaving home. This led to a national board position with Hockey NZ and then founding chair to create and lead the Hockey NZ Foundation.

Jon’s love for sport has never diminished, though he has expanded his interests being a founding trustee of MESH Sculpture Trust and being invited to join numerous boards including St Paul’s Collegiate, University of Waikato Foundation, Hamilton Golf Club, The Donny Trust, The Halberg Trust and more recently leading the fundraising committee of the Neurological Research Charitable Trust. Gleaning valuable insights from fellow trustees like Dame Alison and Barry Paterson and other special people such as Bernie and Kaye Crosby, both Jon and Sue have adopted the same attitude when it comes to giving. Hamilton has been good to the Tanner Family over many generations so giving back to Hamilton is important to them. The Tanners are also true Kiwis when it comes to loving and caring for their surroundings and they have a healthy regard for a beautiful garden.

Hamilton Gardens has always impressed them as a special place. They consider the Gardens to be one of Hamilton’s greatest assets, along with its visionary designer, Peter Sergel, and Jon and Sue were thrilled to be able to support his vision. Peter said the Mansfield Garden “will be a recreation of an early 19th century New Zealand garden with elements that Mansfield described in her internationally famous story, The Garden Party.” The game of tennis and gardens are a longstanding love of the Tanner Families over generations, so they found the perfect place for their gift to the Gardens: the tennis court under development at the Katherine Mansfield Garden, while utilising one of the giving solutions of Momentum Waikato Community Foundation.

As a founding trustee of Momentum Waikato Community Foundation, Jon believes in the foundation’s role in connecting generous and passionate people to causes that matter and endowing charities throughout the Waikato region through the power of collective giving. Jon and Sue believe Momentum Waikato is the ideal vehicle for their philanthropic gifts as it makes giving simple. Most importantly, by directing their charitable giving through the foundation during their lifetimes, they are able to give to any cause they choose and enjoy the pleasure it provides for others.

Jon recalls his father Keith once telling him, “Take from this world what you need and leave the rest for others.” Those words ring true for Jon, as he and Sue continue to be actively involved in new projects in the region, forever committed to our community and its people.